After the last few weeks, it's high time that I posted an introduction to our American Girl dolls. I've already posted about our first dolls, but I took photos yesterday of all the old and new ones together. Plus, the story of how we've found many of them is quite fun . . . even Mom has some dolls of her own! We've been collecting lots of TLC dolls on Craigslist, which Elizabeth and I fix up for foster girls --- and we would like to find an orphanage to send to as well! So, we have lots of dolls in the house, but this page shows "our girls".

Originally, I thought it would be easiest to introduce them in order of arrival, however, as the page goes down here the dolls are not necessarily in order. Just a quick recap from the older post, but Addy and Kirsten arrived for Christmas of 1995 (when Elizabeth and I were eight years old). Felicity and Samantha showed up one year later for Christmas of 1996, and Josefina came for Christmas of 1997. Three years went by before a catalog arrived in the mail announcing the arrival of Kit. She was the first historical girl with short hair . . . so, Elizabeth and I took the proceeds we made from a garage sale and ordered two of them.

That was the extent of our collection until the end of March 2018. In fact, the dolls had been put away in their boxes and a dresser for years --- until March, when we decided to go through the closet. Originally, our idea had been to sell them off, but seeing them again --- well, we couldn't. We are going to sell Kirsten and Samantha, but that is merely because we have now gotten into looking at some of the newer dolls and prefer a number of others.
​So, that is where we pick up the story. 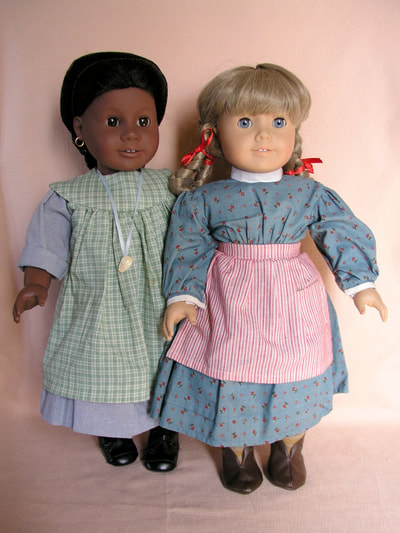 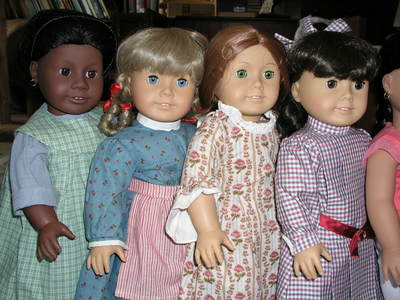 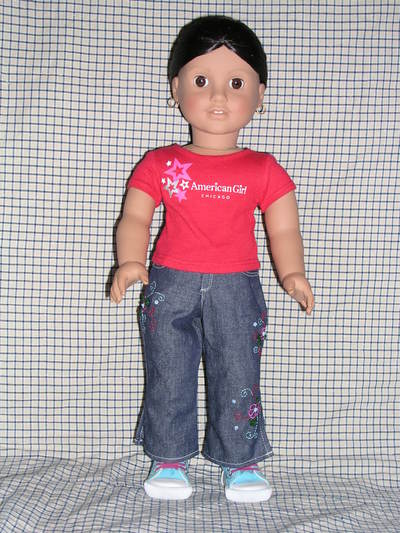 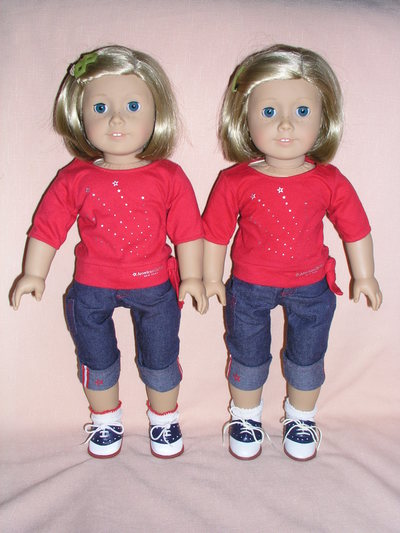 Finding Leonor and pulling out all of our own dolls really inspired us, so we decided to plan for a real doll display. We are going to work on modifying a closet into a doll area --- building shelves at the height of our AG dolls and Gene Marshall dolls, and then putting some kind of special double doors. With a real area of display to look forward to, we have decided that we would like to add a few more dolls to our own collection . . . plus, we'd like to sew some clothes and fix some dolls as presents for some little girls. While I was plowing through dolls available online, Mom actually found one that she​ needed . . .

Our next dolls were a really cool Craigslist experience. We found an ad for a group of five dolls that had belonged to a girl (now fourteen). They were all played with (ranging from good to very good condition) and loved, but still very nice looking! After some days of e-mailing, we came home with five dolls, the AG hair care set and a pile of clothes (some AG and some other off brands) for $185.00. We were thrilled! Elizabeth kept two of them: Grace and Isabelle. They have been renamed "Jill" and "Camilla" respectively. Jill is a big fan of Julia Child, so she is setting up an organic gourmet kitchen of her own . . . all she needs is the AG Gourmet Kitchen set and some free time! 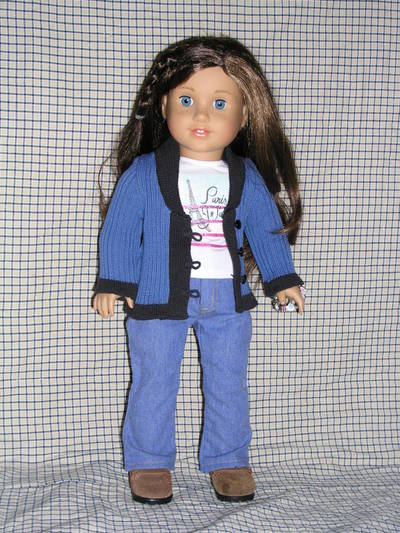 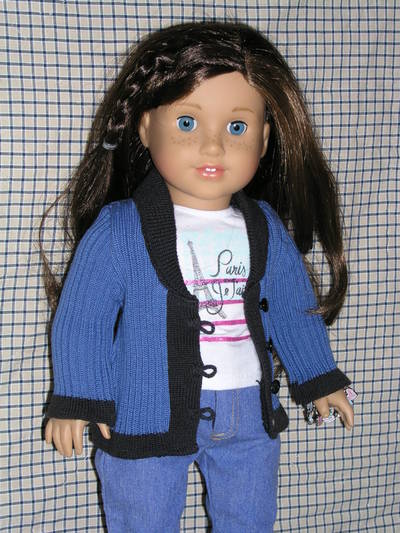 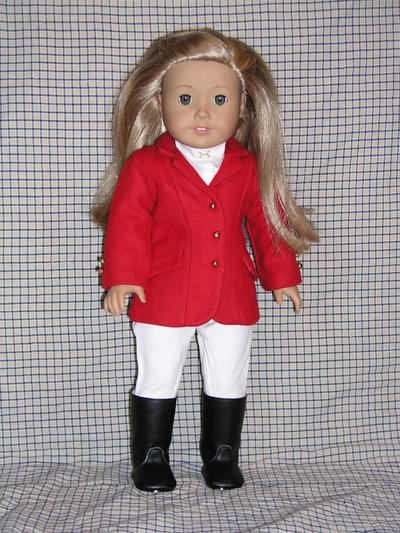 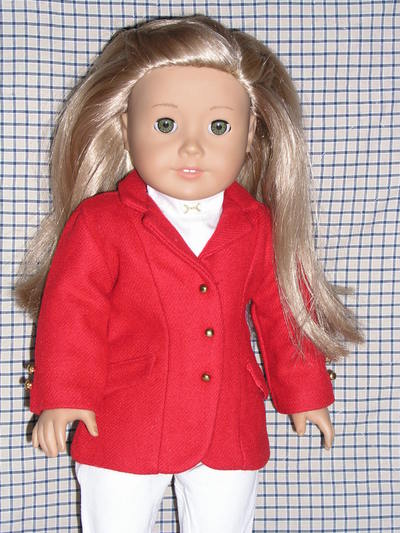 Click on these photos to see them full size.

Another nice doll found her way to the house via a rather sad route. We found a really cool lot on eBay for three dolls, totaling $51.00 a piece, shipped. Not bad! Especially as two of them were Mia and Chrissa, two dolls that Elizabeth wanted to see. The seller said that one doll (Julie) had a small amount of magic marker on her body, and that Mia had a thumbprint size of red ink on her body. Nothing else on them at all. We bought it, and the seller was even willing to include bonus clothes. The box arrived, and although the dolls were all wonderfully wrapped and packed, it was a total disappointment. Chrissa had a large amount of purple dye in and around one ear, and the other two --- well, the bottom half of their bodies were totally painted, torn and marked in a disgusting and disturbing way. We initiated a return, and after two and a half weeks of rude e-mails from the seller and phone calls with customer service, eBay refunded our money when the seller refused to do anything. That left us with Chrissa and Mia (Mia has now had a body swap, and Chrissa has had her ear fixed with Oxy treatments.), and a spare Julie head and limbs! Elizabeth adopted Chrissa and turned her into a Russian ice skater named "Alix".
Click on these photos to see them full size. 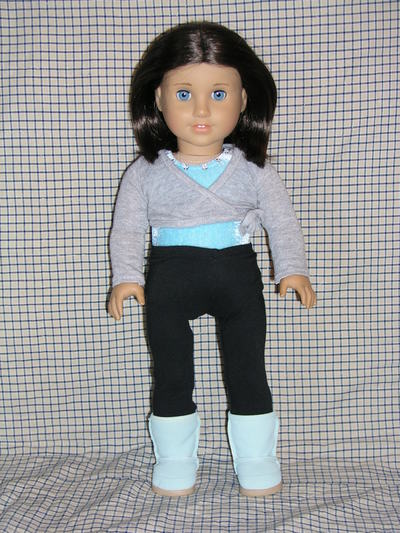 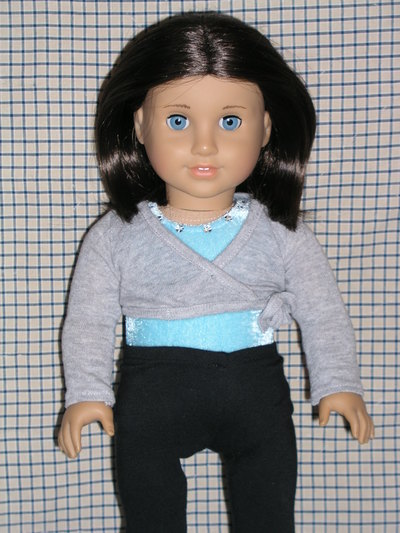 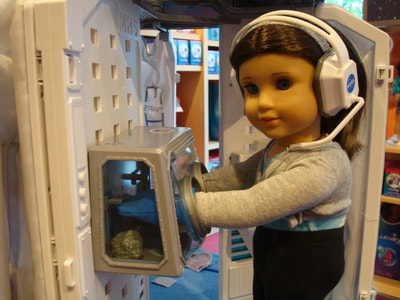 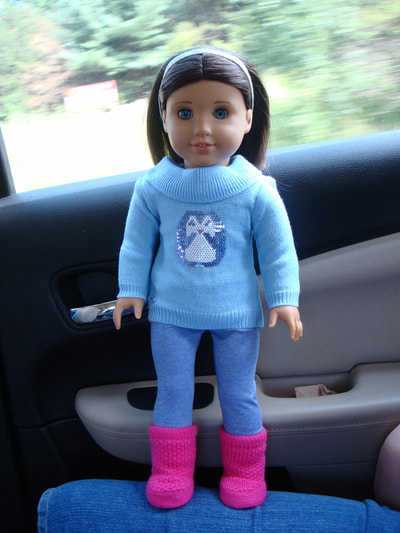 From here down, the dolls are not in order of arrival, rather however I upload them! :)

Ever since Nanea arrived, I had a hankering to customize a Nanea doll with a short-haired wig. I was really hoping that it would be possible to make a brother for her, but the face mold seemed to look so like a girl, that I was not sure it would work. What a thrilling day it was when somebody on a forum listed a TLC Nanea doll who was wigless, had eyes swapped to brown and the eye makeup removed. I tried all kinds of wigs on it, but the Monique Johnny in dark brown was the winner. Dress him up with a straw hat and a polo shirt, and there was Benny (Nanea's twin brother)!
Click on the photos below to see full size.​​​ 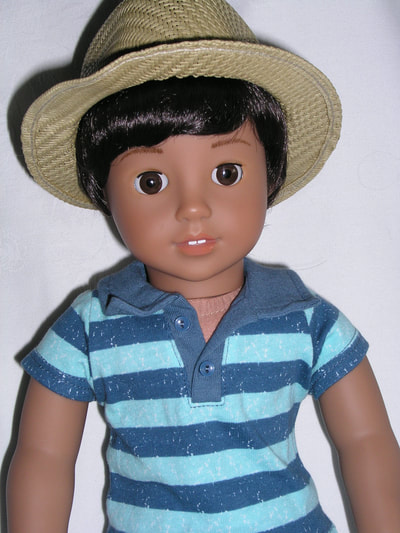 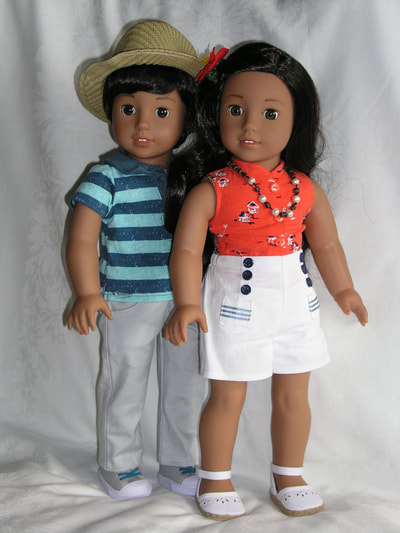 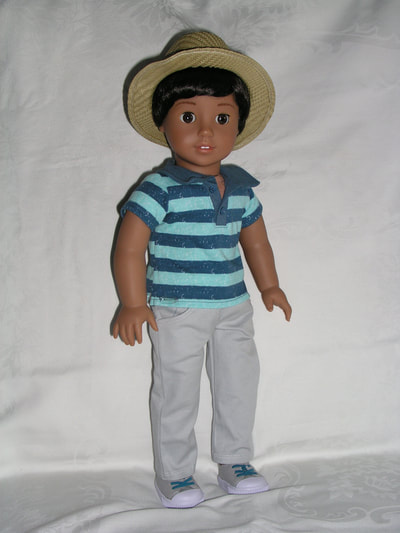 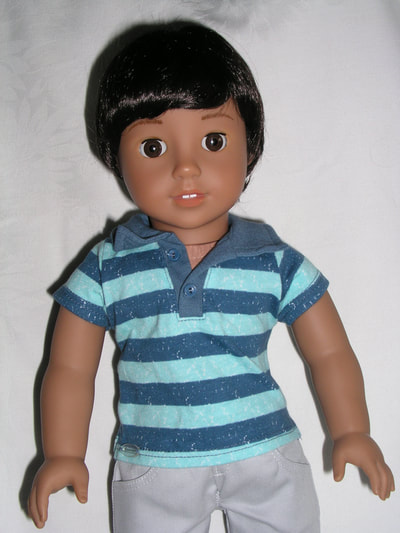 One really fun thing about getting into these dolls again, is the fact that we learned about there being an American Girl store in Columbus! After living here all these years, we'd never heard of it. Well, as soon as the weather turned nicer, we decided to go down one afternoon. We went on a Wednesday and spent more than four hours in there . . . plus, I took 307 photos! While we were there, Elizabeth fell in love with Truly Me #62. She is a medium skin, brown eyes, dark brown hair doll with the Sonali face mold. She just had to come home with us, so after looking at every #62 available at the store, Elizabeth found Bessy. She is named for a very special cousin on Dad's side of the family. She is from the Honduras and has a little Yorkie pup named Gigi. Bessy is best friends with my doll, Zaida.
Click on the photos below to see full size.​​ 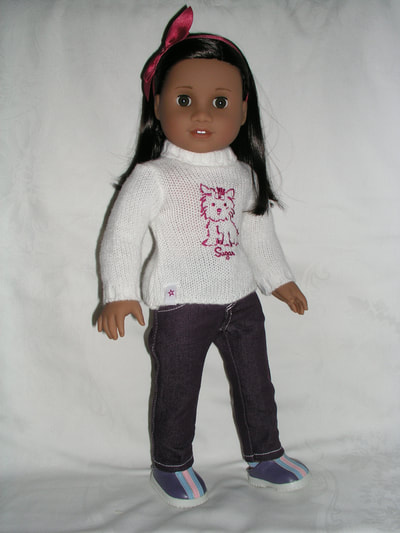 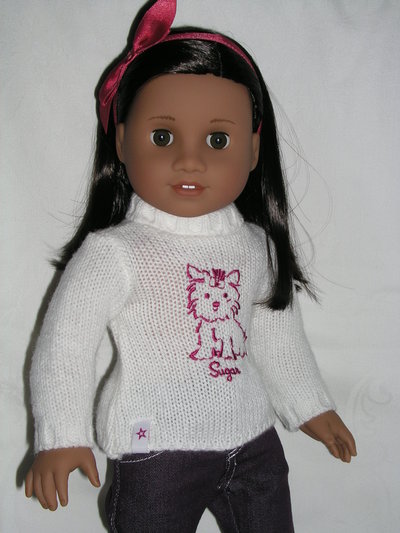 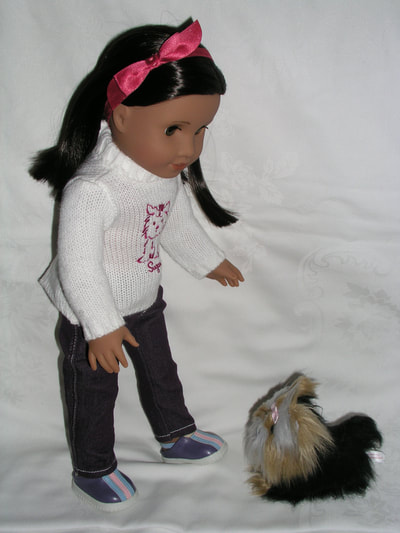 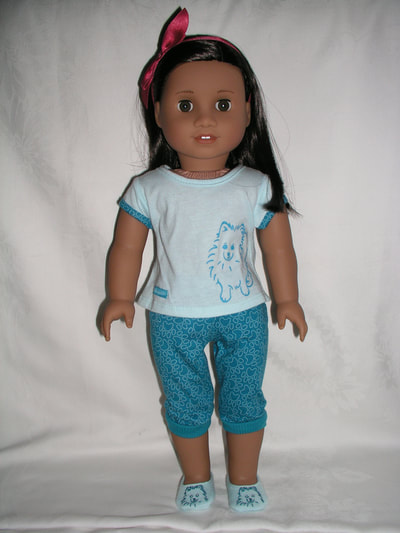 Zaida (pronounced Zie-duh) is a re-wigged Lea Clark doll. While it took a while to find the right wig for her (having tried her as a totally different character -- read her whole story here), she looks amazing with a dark brown Kemper Tyler wig. She is best friends with Elizabeth's doll, Bessy, and is named for a very special cousin from Cuba on Dad's side of the family. She has a little dog named Valentino, but she calls him "Vale". All of her clothes, and even her pajamas, feature Coconut illustrations, because he looks just like Vale! 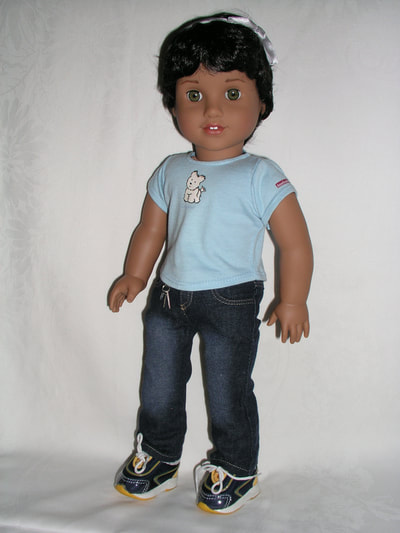 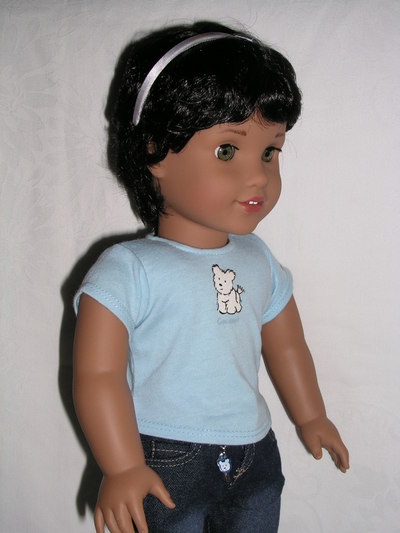 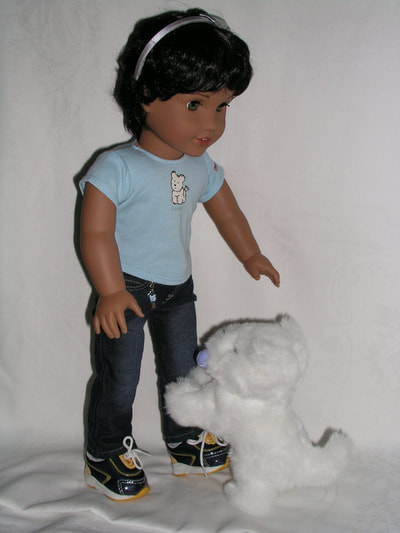 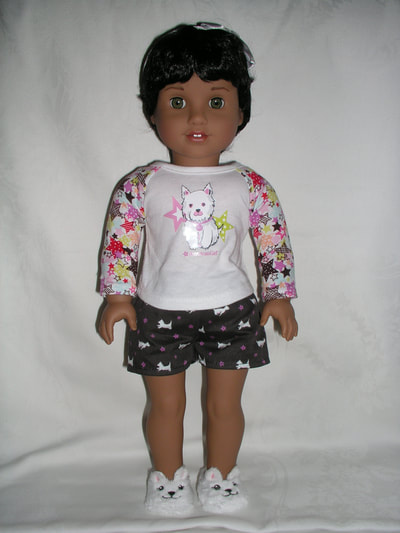 Well, that's our collection so far. I'll update this page as things change, because we are hoping to add some more dolls. Are there ever enough?  . . .